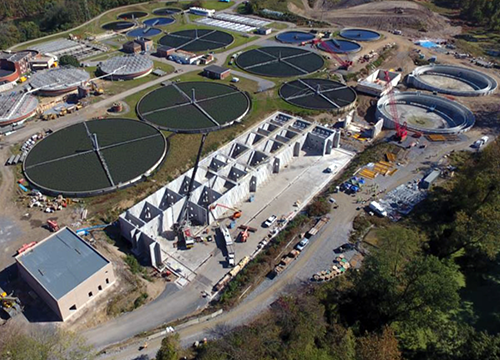 The City of Reading owns and operates a wastewater treatment plant (WWTP) on Fritz Island which is designed to treat 28.5 million gallons per day (MGD) originating from twelve municipalities. Fritz Island is an island formed between the Mifflin Arm of the Schuylkill River and Angelica Creek. The original WWTP was constructed in the late 1800's on the opposite side of Angelica Creek. In the late 1800's, the area selected for the WWTP was more rural than the City, so the City constructed the 6th and Canal Street pumping station to convey the flow across the Schuylkill River. This pump station was originally steam powered. The original plant appears to have had primary clarification, a large septic tank, and sludge drying beds with the clarified effluent being discharged directly to the Schuylkill River.

In 1929, the City moved some portions of the treatment plant and constructed a larger facility on the current Fritz Island site. During construction, a pipe was laid to convey the clarifier effluent to the new location. This line crossed the Angelica Creek and the Mifflin Arm of the Schuylkill River to transport the partially-treated wastewater to the four newly constructed square fixed nozzle sprinkling filter beds. These beds contained rock media and had clarifiers constructed near them to allow any biological solids to be removed prior to discharging the effluent to the Schuylkill River.
Wastewater treatment continued in this manner until the 1950's. With the growth that occurred leading into the 1950's, the City determined the need to sewer additional areas would require the construction of two additional pumping stations. The 19th Ward pump station was constructed to convey flow from a portion of the City near the Spring and Bern Township borders. This flow is conveyed into the 6th and Canal Street pump station. The 18th Ward pump station was built to convey the wastewater from a section of the City close to the WWTP but at a lower elevation. At the same time, the City re-evaluated the primary treatment occurring at the original WWTP and the secondary treatment occurring at the Fritz Island WWTP. This resulted in all wastewater treatment processes designed at the current Fritz lsland location.
The plant as constructed in 1959 was designed to treat 15 MGD. In this time frame, the 6th and Canal Street pump station included mechanical screening to remove large solids, as well as a grit removal system in order to protect the pumps conveying the wastewater. Similar processes for the flows received from the 18th Ward pump station were built into the grit chamber facility adjacent to the original WWTP site. Therefore, the effective treatment of the wastewater actually begins off site from the present WWTP.
As growth continued, outlying municipalities expressed their desires to have wastewater treatment capacity at the City of Reading facility. Intermunicipal agreements were developed in the 1950's in order to adequately treat the wastewater, and this capacity was included in the design for Reading's WWTP. The continued growth of the City and surrounding area created issues at the WWTP, evidenced by the Pennsylvania Department of Environmental Resources (PA DER) actions. In response to the 1984 Chapter 94 submittal by the City, they replied with a connection prohibition for the City's wastewater treatment facilities. The City responded by commissioning an Act 537 Sewage Facilities Plan to be conducted for the City and the contributing municipalities. Determinations were made as to the volume and strength of flow projected from each of the municipalities, and from within the City limits. These projections became basis of design for a plant upgrade beginning in 1986.  The plant's 15 MGD design capacity was increased to 28.5 MGD.  Following construction, the connection prohibition was lifted.
With the continued growth in the area surrounding the treatment plant, odor complaints began to surface.  Additionally, as growth continued in outlying areas, PA DER issued the 1994 prohibition for the areas tributary to the 18th Ward pump station and the 6th and Canal Street pump station, which limited the number of connections by the municipalities on a monthly basis while the City conducted a plan of study and remedial action was taken. The prohibition of 1994 focused mainly on the collection system problems. In the same time frame, the City began experiencing ammonia nitrogen effluent discharge violations. In 1997, a consent order and agreement (COA) was entered into with the Pennsylvania Department of Environmental Protection (PA DEP). Also in 1997, the City entered into a COA with the United States Environmental Protection Agency (US EPA) regarding the industrial waste pretreatment program which had begun in the mid 1980's. The City of Reading performed a facility audit of the plant and collection system in their entirety.
The City's response to the odor complaints and ammonia nitrogen violations was the construction of the expanded solids handling facilities and the covering and scrubbing of air from particular treatment units. Construction commenced in 1999.  The recommendations made from the collection system facilities audit that followed the 1994 prohibition resulted in upgrades to the 6th and Canal Street pump station, as well as the replacement of the gravity line leading to the 18th Ward pump station, construction of a new 18th Ward pump, and construction of a new force main leading from the 18th Ward pump station. This construction began in 2001.
Within the City's collection system, there are four pumping stations. As discussed, the 6th and Canal Street pump station is the oldest and conveys flow from seven of the twelve municipalities contributing flow to the WWTP. This is approximately three-quarters of the flow received at the WWTP. The next largest pump station is the new 18th Ward pump station which also serves seven municipalities. The 19th Ward pump station services two contributing municipalities as well as the City with its flow ultimately being received at the 6th and Canal Street pump station.  A very small pump station in the West Reading area conveys flow from several homes near the City limit.  These lines all converge in a primary distribution box at the same point where recycled flows are returned to the head of the plant.
After entering into a Consent Decree with the Department of Justice, the US EPA, and the PA DEP, the City of Reading WWTP has maintained excellent permit compliance since 2005.