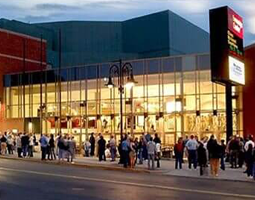 Santander Arena
The Santander Arena (formerly known as the Sovereign Center) is a 7,160-seat multi-purpose arena, in Reading, Pennsylvania. It was built in 2001. The arena sits on the former site of the Astor Theater; one of several grand movie and theater palaces built in Reading in the early 20th century. Closed in 1975, the theater sat vacant for over two decades. In 1998, the Astor was demolished to make room for the Santander Arena. Early in construction, steps were taken to retain mementos of the Astor, including its ornate Art Deco chandelier and gates. These are on display and in use inside the arena corridors, allowing insight into the ambience of the former movie house.
View Map 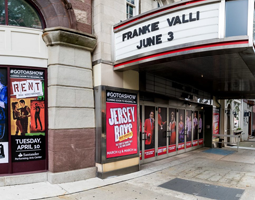 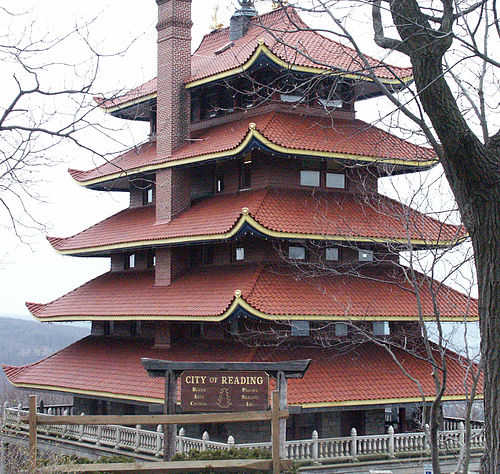 The Reading Pagoda
The Pagoda is owned by the City of Reading but is managed and preserved by the Foundation for the Reading Pagoda. It houses a small café and a gift shop, and functions as an icon for the City of Reading. The Pagoda is also the home of Pagoda Skyline, Inc., a non-profit volunteer organization formed in 1969 to help with the restoration and preservation of the Pagoda, the William Penn Memorial Fire Tower and Skyline Drive.
Completed in 1908 at a cost of $50,000, this pagoda was intended to be the hotel/restaurant centerpiece of a luxury resort. When plans for the rest of the resort were abandoned, the 7-story wooden building on 10 acres (4.0 ha) of land was donated to Reading in 1911. It is now part of the Mount Penn Reserve, 1,595 acres (645 ha) of municipally-owned land.
View Map 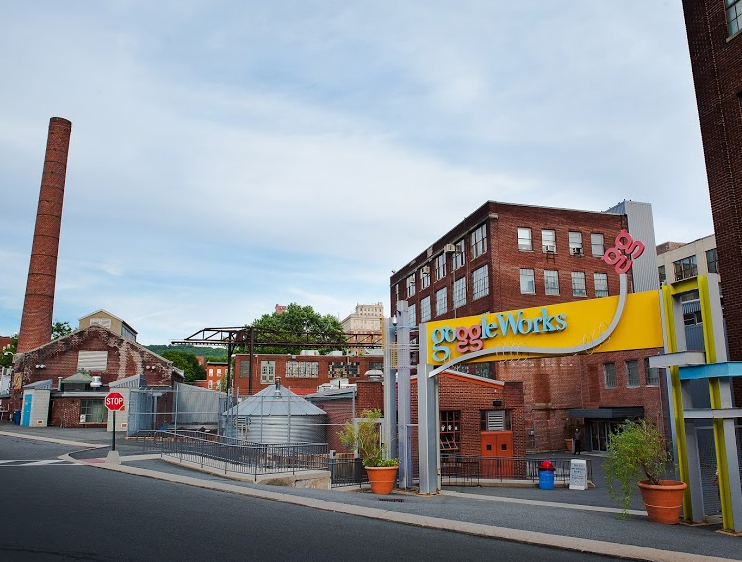 GoggleWorks Center for the Arts
is a community art and cultural resource center located in Reading, Pennsylvania. The mission of the GoggleWorks is “to transform lives through unique interactions with art.Located in the former Willson Goggle Factory building, GoggleWorks Center for the Arts features eight teaching studios in ceramics, hot and warm glass, metalsmithing, photography, printmaking, woodworking and virtual reality; 35 juried artist studios; and headquarters of over 40 cultural organizations. GoggleWorks also includes several exhibition galleries, a 130-seat film theatre, a bar/restaurant, and store featuring handcrafted works by over 200 artists working within the building and beyond. Admission (excluding special events) and parking are always free.
View Map 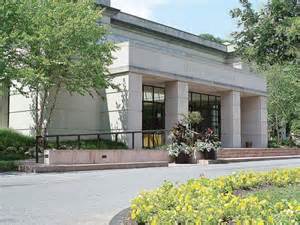 Reading Public Museum and Planetarium
While the art of many nations and people is represented in the permanent collection, special emphasis has been placed on painting. The fine art collection includes more than seven hundred oil paintings by American and foreign artists such as Benjamin West, Milton Avery, John Singer Sargent, N.C. Wyeth, George Bellows, Raphaelle Peale, Frederic Church, Joshua Reynolds, and Edgar Degas. Modern and Contemporary art in the collection includes works by Dale Chihuly, Chuck Close, and Keith Haring.The museum's collection includes a real mummy from the Ptolemaic period in ancient Egypt.The natural history collection includes thousands of insects, birds and mammals, and more than 25,000 mineral specimens. Over 30,000 objects are included in the anthropological and historical collections, including sculpture from Southeast Asia, ivory and jade from China, Roman glass, pre-Columbian gold and a large and comprehensive collection of sculpture and textile work of American Indians, much of which is unique to the Museum. Many of the works in the collection have been donated by citizens. Over 11,000 first class specimens, the best of several old collections purchased by Levi Walter Mengel in the first half of this century, make up the collection of Berks County Indian relics.
View Map