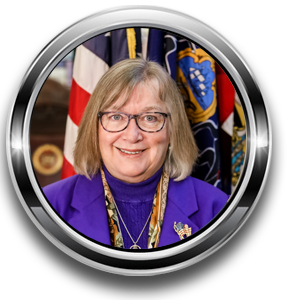 Donna Reed, now in her fifth term on Reading City Council representing District 5 – Reading’s Great Northwest, is a graduate of Muhlenberg Township High School and of The American University, Washington, DC, where she received a Bachelor of Arts degree with the dual major of political science and communication.

As a university student, she interned on Capitol Hill for a former Kentucky congressman and also for the Copley News Service assigned to the Congressional correspondent. She also spent one year with the Washington bureau of the Baltimore Sun as a copy girl.

She logged 23 years as a Reading Eagle reporter, editor and columnist. After leaving the Eagle, she was elected to Reading City Council. Her blog, “City Hall Revisited,” appeared from 2010 through the first half of 2012 on www.readingeagle.com. She also worked as assignment editor for the Berks Edition of Channel 69 News. Prior to rejoining City Council in January 2010, she also contributed articles to the then-fledgling BCTV.org news Web site.

Donna has written for local, state and national publications. Editor of the 2008 “Pagoda Centennial Tales,” she is founder of the Pagoda Writers Group.

She has researched the biography of the late state Sen. Mike O’Pake.  She is as past editor of The Historical Review of Berks County.

Donna is a decade-plus-long member of the board of Crime Alert Berks County and served on both the Reading Planning Commission and the Reading Parking Authority.

Donna has also served as an editor at The Ephrata Review and garnered two first-place Keystone Press Awards in that capacity. She continues as a free-lance writer contributing to Berks County Living magazine and other publications.

She is the City Council liaison to the BCTV board, a member of the Pagoda Foundation, and a member of the GRCA Women2Women Council.  She was recently appointed as a trustee of the Berks History Center.

Donna is married to Tom Knause, a retired Eagle news editor. Their son, Harry T.R. Knause, is 30 and a trainer/manager of a local gym. Grandson Hunter Thomas Knause was born to Harry and Samantha Robinson in December 2016.  Their family resides in the 18th Ward.