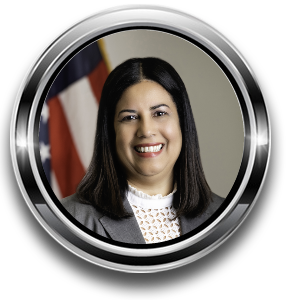 Maria was born and raised in the Dominican Republic. She moved to New York City in 1989 to continue her education, and in 1995, she graduated from Hunter College with a Bachelor’s Degree in Economics. While attending college, she assisted staff at Hunter College and NYU in implementing bilingual education programs at public schools in various locations, including Albany, NY and St. Thomas, Virgin Islands. After she graduated, Maria continued to serve her community and apply her knowledge of economics as both a tutor for undergraduate students and as an assistant in the Department of Education for graduate students.

In 1998, Maria relocated from New York to Reading, PA, and in 2000, she began working for the City of Reading as its Auditing Coordinator. While working for the City, she also served as a tutor in economics for undergraduate students at Albright College. In 2012, Maria started working as an Internal Auditor in the Controller’s Office at the County of Berks.  In 2015, she returned to the City of Reading to again serve as the Auditing Coordinator, and in less than a year, Maria was promoted to the Accounting Manager for the City.

In June of 2019, Maria was appointed by City Council to be the Interim City Auditor. Before she was appointed to the position, Maria had worked as the Finance Manager for some non-profit organizations in the community.  And in the November 2019 election, she ran as a write-in candidate, and she was elected to become the first Latina City Auditor, one of the few Latinas elected City-wide in the Commonwealth of Pennsylvania. As the City Auditor, Maria was elected to perform an oversight role of the City’s finances.

Maria is proud and humble to have been elected to hold the position of City Auditor for the City of Reading and for the Community.

The City Auditor's Office is to conduct performance and financial audits and studies which provide insight into City departments and their programs. These aim to improve the process of establishing City programs, evaluating their performance, providing the City Council and the Administration with appropriate information and making any necessary changes to ensure that City programs are as efficient and effective as possible.

This financial oversight is independent of the Executive and Legislative branches and reviews all expenditures of the Mayor, City Council and City Boards, Commissions and Agencies. The Auditor has a wide array of responsibility, including tasks such as:

The City Auditor’s office is located on the second floor in City Hall, room 2-36, 815 Washington Street. The City Auditor may be reached by telephone at (610) 655-6123 during regular business hours.